NEW TRACK ‘UP IN THE GALAXY’ OUT NOW! BUY NOW DIGITAL ON BANDCAMP OR GET IT ON ITUNES STREAM IT ON SPOTIFY

Broken Brass are next level brass music. Explosive and energetic, mixing the energy of brass with the attitude of rock ‘n’ roll, the drive of electro-punk and the flow of hiphop.

Live they deliver hard-hitting brass power and their riotous shows have seen them conquer crowds all over the world. With origins based in the Netherlands, Broken Brass have been firing up a storm all over Europe with an energizing and eclectic live sound, pairing punchy basses with hard-hitting brass. Consistently filling 300+ capacity venues without promotion and on live reputation alone, in every country they play, shows that underestimating this brass band is out of the question.

The enigmatic nine-piece have conquered clubs and festivals in 20 countries with slots on Jazz á Vienne, Secret Garden Party, Shambala, Kendall Calling, Green Man, Fusion Festival, North Sea Jazz, Eurosonic and more. In addition, the globetrotting act has sold out multiple UK and Dutch venues, gained airtime from all the big Dutch media and in the UK from a.o. Craig Charles Funk and Soul Show and BBC Radio 6. With more than 500 shows under their belt Broken Brass is a live force to be reckoned with. 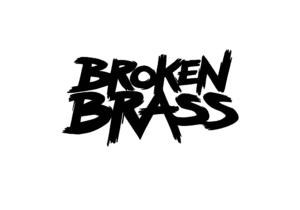 BOOKINGS REST OF THE WORLD